Due to Easter break, there will be no shipping from Friday 19th April - Tuesday 23rd April 2021 incl. 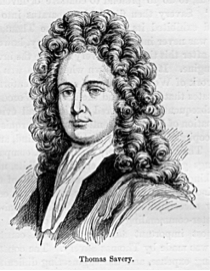 Thomas Savery was a member of a well known family in Devonshire, England and was born in 1650. He was well educated and became a military engineer, with a passion for mechanics and mathematics he spent a lot of time developing various kinds of apparatus and inventing. He constructed a clock, which still remains in the Savery family and is considered an ingenious piece of mechanism.

He invented and patented an arrangement of paddlewheels, driven by a capstan for propelling vessels and endeavoured to sell the idea to the British Admiralty and the Navy board. Savery fitted his apparatus into a small vessel and demonstrated this on the River Thames however it was never adopted by the Navy.

It was after this time that Savery became an inventor of a steam engine. Whether or not Savery was familiar with the work of the Marquis of Worcester is unclear, but it is highly likely that he was, in any case, his engine bears a striking resemblance to Somerset's and there is anecdotal evidence that Savery attempted to destroy documents relating to his designs.

A breakthrough came for Savery when he recognised the need for a mechanism to stop mines and pits from flooding and on 2nd July 1698 he patented a design for the first engine "The Fire Engine" and a working model was then submitted to the Royal Society of London. The engine was ready and testing was undertaken to ensure that it was working to Savery's satisfaction. He then exhibited the engine before King William III at Hampton Court and obtained his patent:

A grant to Thomas Savery of the sole exercise of a new invention for raising of water, and occasioning motion to all sorts of mill works, by the important force of fire, which will be of great use for draining of mines, serving towns with water and for the working of all sorts of mills to hold for 14 years; with usual clauses.

Savery's engine was made predominantly from non-ferrous metal such as brass, copper and bronze and was assembled from cast or formed parts which were sweated or soldered and riveted together. For the device to operate properly the joints needed to be sealed; a condition not easily achieved in the late 17th century. In the 17th and 18th Century there were no machine tools capable of machining cast iron cylinders of the size and accuracy required.

The patent was extended by an additional 21 years by an Act of parliament which became known as the "Fire Engine Act". Savery's patent covered all engines that raised water by fire and Thomas Newcomen worked in partnership with Thomas Savery to develop the Newcomen Engine within the Savery Patent.

Thomas Saverys "Fire Engine" had produced partial success for the pumping of water from mines which were being drowned out and abandoned. The "Fire Engine" had no heavy moving parts and used a vacuum to suck water into a container and then steam pressure to force water to a height, needing only simple valves to control the action. This was suited for modest lifts but was most impractical for raising water from depths and so failed its stated purpose. However Savery's engine was studied by many men who became engineers because of the inspiration they drew from Savery's experience.