T A Savery & Company is an established engineering company, originally founded as precision engineers and manufacturers of steam engines. Savery now design and manufacture hydraulic systems, power packs, proportional lift controls, electronics associated with hydraulic systems and are the UK distributor for the Hydraforce range of valves and electro-hydraulic components.

The Savery name however has been associated with engineering even longer going back to the birth of the industrial revolution when Captain Thomas Savery a military engineer with a passion for mechanics, mathematics and inventing became the inventor of a steam engine. Thomas Savery recognised the need for a mechanism to stop mines and pits from flooding and on 2nd July 1698 he patented a design for the first engine "The Fire Engine" and it was this patent that led to the invention of The Newcomen Engine.

Although there were a number of detailed improvements to the Newcomen engine, there was no essential change to the principle until James Watts developed the separate condenser and closed in the top of the cylinder in 1776. This was some 64 years after Newcomen's first success by which time over 600 engines had already been built in Britain.

In 1904 William Edward Savery an engineer and inventor and direct descendant of Thomas Savery set up a company in Tipton with his brother who designed and manufactured marine steam engines and boilers for use in canal barges, tugs and launches. The company moved to Bracebridge Street in Birmingham and in 1906 became a limited company known as T A Savery and Co. Limited.

William had gained experience in gas engines and machine tool design which led to the design of high speed machinery for steam launches, including a patented system of liquid fuel firing for water-tube boilers. 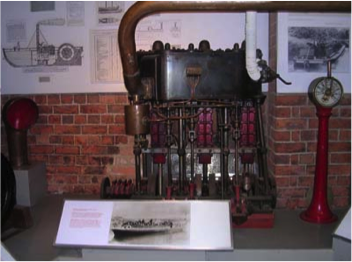 Around 1920 and with the advent of the combustion engine Savery moved into new projects turning to subcontract manufacture parts for a variety of industries including Midland Red manufacturing bus engine components.

In 1921 Savery exhibited at the Birmingham and Midlands institute to demonstrate the progress from the days of historic "Savery" in 1698 to the present day. The exhibit included a 2" standard V.R. type patent rotary pump and other pumps shown cut away so that the mechanisms could be studied.

In the 1930's William Savery developed a new type of pump (the "Annular Piston" metering pump) for providing pulseless flow at high pressure for the extrusion of artificial silk.

The Annular piston metering pump was then adapted for oil hydraulic applications in the late 1930's and a version of this was fitted to the Rolls Royce Merlin engine used on many aircraft such as the Supermarine Spitfire, Avro Lancaster and the Hawker Hurricane to operate the undercarriage. With the advent of war a huge increase in production was required which Savery alone could not meet so a free licence was granted to Lockheed of Leamington Spa.

After the Second World War the pump was further developed for industrial hydraulic applications, a range of standard pumps was developed and Savery started to design and manufacture bespoke hydraulic systems.

A relationship was developed in 1959 with Viking Chase who became the US distributor for the Savery range of pumps.

In the 1960's new residential housing developments were being built which used a central oil storage system for electricity and heating. This meant that each home used fuel from the central store but had its own meter. In 1968 Savery was commissioned to produce a meter to monitor the usage for individual properties.

In the 1990's Savery was awarded BS5750-1 making them the first hydraulics company in the UK to register for this Quality certification this led to approval for work with the MOD on hydraulic systems, components and hydraulic ground support equipment including repair installation and commissioning.

In 2006 T A Savery and Company Limited was sold and is now privately owned. Savery continue to manufacture and commission high specification hydraulic systems and components. For more information on Savery's products and services please contact us on +44 (0)24 7664 5555 or email