Due to Easter break, there will be no shipping from Friday 19th April - Tuesday 23rd April 2021 incl.

In the early years of the 18th Century Thomas Newcomen (1663-1729) a Baptist of Dartmouth in Devon and his assistant John Calley developed an engine operating within the Savery Patent. Thomas Savery died in 1715 and an organisation was set up known as the "Proprietors of the Invention for Raising Water by the Impellent Force of Fire" to exploit the invention. Newcomen was granted a significant number of shares in this company. The spread of the invention was controlled until the lapse of the patent at which point at least 95 engines had been built in the UK and the stage had been set for the rapid rise in industrial activity which was to accelerate the "Industrial Revolution". 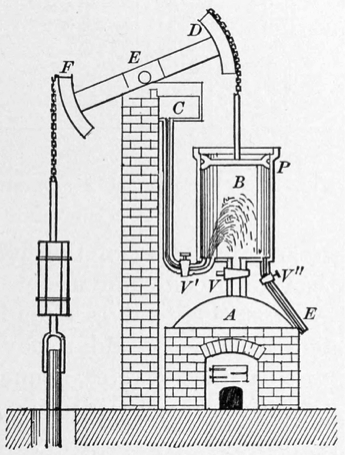 Newcomen's engine employed a vacuum created by condensing steam from pressure just above the atmospheric. He employed a vertical open-topped cylinder in which a piston moved. The piston was connected by chains to one end of a massive rocking beam, at the other end were chained the pumping rods that went down into the mine. Steam was admitted into the boiler placed below, and the weight of the pump rods activated the beam so that the piston moved towards the top of the cylinder and drew in steam. Water was then sprayed inside the cylinder and a vacuum created into which the piston was forced by atmospheric pressure, rocking the beam and creating a stroke of the engine. Shortly after an upgrade was made by adding a plug rod hanging from the rocking beam with pegs which during the stroke, actuated levers connected to the valves making the engine self acting.

The invention was of prime importance and became an immediate and outstanding success, however the power of the engine was limited by the level of contemporary technology; the ability to cast large cylinders and supply them with adequate steam.

Newcomen's first successful engine was installed in Tipton near Dudley Castle in 1712, followed rapidly by others in coalmines in Warwickshire and Newcastle upon Tyne and then spread throughout the country giving a very rapid take up of the invention. A few years after adoption in the UK its use spread to continental Europe which was a most important technological transfer and one which had a significant effect on mining operations.

Josiah Hornblower, an associate of Newcomen constructed the first engine in the New World in 1753. The engine was installed at the Schuyler Copper Mine in North Arlington, New Jersey. A section of the cylinder remains in the Smithsonian Institute, Washington DC.

Although there were a number of detailed improvements to the engine, there was no essential change to the principle until James Watts developed the separate condenser and closed in the top of the cylinder in 1776. This was some 64 years after Newcomen's first success by which time over 600 engines had already been built in Britain.