DARA was an executive agency of the Ministry of Defence responsible for the maintenance of Royal Air Force, Army and the Royal Navy’s aircraft. DARA offered the capability to completely strip, replace, repair and rebuild aircraft from systems, components and equipment to whole aircraft, for both military and commercial organisations.

A plan was proposed to co-develop RAF St Athan’s existing repair centre spread out across 1000 acres and create a new state of the art facility including the construction of a “super-hangar”, which allowed 47 bays to work on fighter aircraft, the bays could be reconfigured to allow engineering teams to work on heavy-lift, fixed-wing aircraft as well as heavy-lift helicopters.

At the heart of the DARA aircraft facility were two state of the art hydraulic ring main systems that allowed the aircraft hydraulic systems to be fully function tested, filled drain and flushed.

Savery Hydraulics was commissioned to design manufacture and install the complete hydraulic system with the safety of personnel being of paramount importance.

The design needed to;

Two hydraulic power packs with a total installed power of 1575KW, a total flow of 2520 l/min at a pressure of 315 bar were housed in a purpose built plant room.

The flow was fed through 4” pipe work mains into two hangars which involved an installation of over 3500 metres of pipe work, this fed fluid to sixteen aircraft interface units and allow connection to the aircraft’s systems via flexible hoses.

An electronic/computer system controlled the interface parameters with the aircraft and minimised the human input by:

System contamination monitoring was achieved by using an in-line particle counter. Particle counters were incorporated into the hydraulics system by using a software package called “Modbus”. This protocol enabled the PML2 to be programmed to communicate with a programmable logic controller.

The technicians were able to view the cleanliness of the hydraulic fluid during all periods of servicing and testing ensuring that the correct operating cleanliness was achieved which is critical. 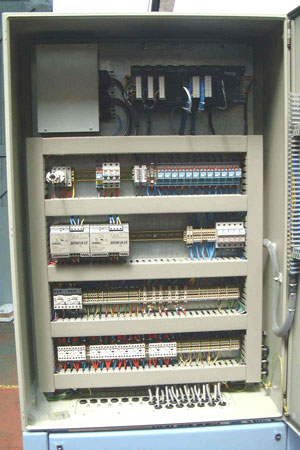